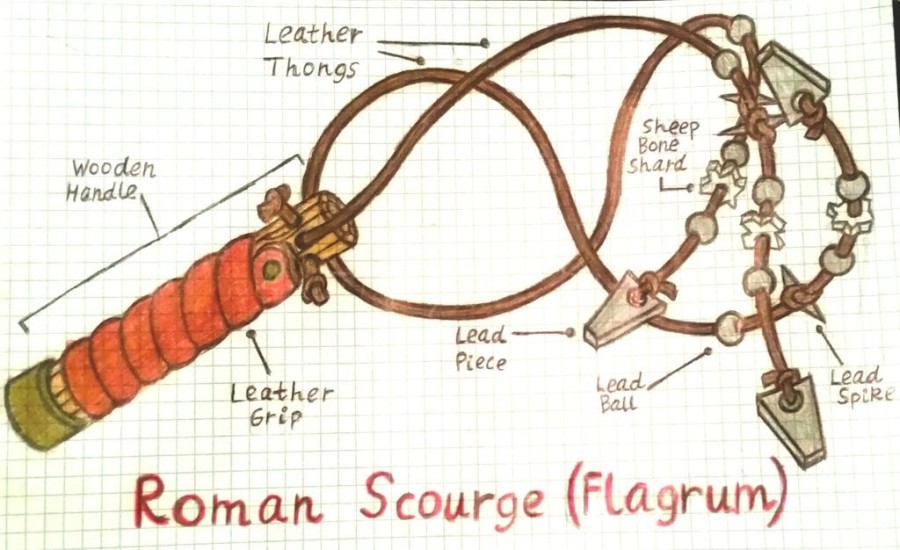 Some short observations to start off this reflection. The Joyful Mysteries span approximately 12 years of Jesus’ life. The Luminous Mysteries approximately 3 years. The Glorious about 90 days.

The Sorrowful less than 24 hours.

I got to thinking about this when I was reading the Gospel accounts of the scourging. Here they are:

Then he released for them Barab’bas, and having scourged Jesus, delivered him to be crucified.

So Pilate, wishing to satisfy the crowd, released for them Barab’bas, and having scourged Jesus, he delivered him to be crucified.

Then Pilate took Jesus and scourged him.

The account from Luke does not say Pilot had Jesus scourged. Rather it describes him telling the Jewish authorities (twice) that he finds no wrongdoing and that he would have him flogged (or chastised), and then released.

Some things I learned along the way. It is not explicitly stated how many lashes Jesus received. While many refer to Paul’s account in 2 Cor 11:24 of himself receiving “40 lashes less one”, we cannot rely on this. According to Dt 25:1-3, the maximum number stripes that can be given is 40. In order to ensure they did not exceed 40, they typically stopped at 39. An important point to hold in mind is that the 40 lashes were not a prelude to execution. They were a punishment that intentionally spared the life of the person being punished.

But, Jesus was not given lashes by the Jews. The Romans scourged him.

Scourging is to be distinguished from whipping. The scourge would have balls made of lead and bits of bone designed to both bruise and tear flesh down to the bone. In short, it was a savage beating designed to inflict pain and weaken through blood loss. Scourging was the beginning of an execution. People being punished for less than capital crimes were whipped with leather whips or caned with rods; they were not scourged.

Jesus was given the Roman treatment reserved for the very worst criminals. Worthy of note is the fact that Roman citizens could not be scourged. In other words, even a Roman citizen sentenced to death would be spared the humiliation and degradation of scourging.

Jesus was sentenced to death under Roman law, for the crime of insurrection. Crucifixion was used to degrade the criminal, and was a hideous public spectacle designed to deter future enemies of the state.

It is good here to recall some biblical verses:

Again, the devil took him to a very high mountain, and showed him all the kingdoms of the world and the glory of them; 9 and he said to him, “All these I will give you, if you will fall down and worship me.”

I will no longer talk much with you, for the ruler of this world is coming. He has no power over me;

So, what is the mystery in the Mystery of The Scourging At The Pillar?

Understand three things, and then ponder. First, scourging and crucifixion go together, it is a package deal. Second, this sentence of death was imposed on Christ as a non-citizen enemy of the state. This execution is specifically designed to deter people from following Christ. Third, when Christ says, “If any man would come after me, let him deny himself and take up his cross daily and follow me,” (Lk 9:23) understand that he is inviting us to insurrection against the devil.

Ask, “Am I a citizen of the State and loyal to the prince of this world?”

The Christian ideal has not been tried and found wanting; it has been found difficult and left untried.

Next: The Crowning With Thorns

3 thoughts on “The Scourging At The Pillar”